YMCA Norfolk celebrated its inspirational staff and chief executive Tim Sweeting outlined its future direction at a day for all colleagues at the King’s Centre in Norwich on April 19.

New chairman, Philip Macdonald, told staff: “We want a society which really supports and develops young people. We can make a difference to their lives and I see in front of me a group of determined and talented people who can inspire them to reach their full potential.”

Chief executive, Tim Sweeting said: “In our work over many years with young people struggling with issues such as homelessness, addictions and family breakdown, we have seen that with earlier intervention there is much greater opportunity to obtain positive outcomes.

“As a result we have expanded our services to engage children and families to maximise the numbers of Norfolk children and young people who can fulfil their potential and to prevent them from requiring more specialist services such as our homelessness services.”

Tim highlighted a couple of developing areas of YMCA Norfolk’s work such as moving into the delivery of day care nurseries, providing more accommodation for young workers by working with social landlords and through buying properties and a continuation of  its developing mental health work.

Staff from across the Christian charity were recognised in its annual staff awards and included:

Staff Member of the Year – Ben Hampton.  A committed staff member, a good leader, performing brilliantly in any situation, positive and a friendly person to be around.

Engagement Worker of the Year (Housing) – Kathy Watts.  From Community Housing in King’s Lynn, Kathy’s clients all showed an average 114% improvement from their first star to the most recent star.

Engagement Worker of the Year (Communities) – Joe Fisher.  A great role model not just for his colleagues but for the young people he supports in schools and the communities.

Norfolk Spirit Award Ann Symonds.  Goes above and beyond and delivers consistent high quality work. A calm and tranquil influence sometimes in the midst of apparent mayhem.

Team of the Year – HR.  Professional, supportive and accessible, steady and strong. They have had a significant amount of additional work to deal with this year and they have completed it effectively all the while being role models in living out our organisation’s behaviours.

Fundraising Team of the Year – Youth & Community.  A large team which raised a large amount of money, £2341.  This team’s efforts were led by Kevin Dynes who undertook a number of fundraising activities this year including the Sleep Easy and a sponsored bike ride.

YMCA Norfolk Behaviours – Graeme Stewart.  Someone who always communicates in a professional manner, who handles change particularly well, works well with teams across the organisation, and engages effectively with young people.  This person has contributed a particular skill in identifying customer and funder requirements, which has helped us win funding to continue and extend our mission.

Pictured above are the winners of the YMCA Norfolk Staff Awards with chairman Philip Macdonald (second right). 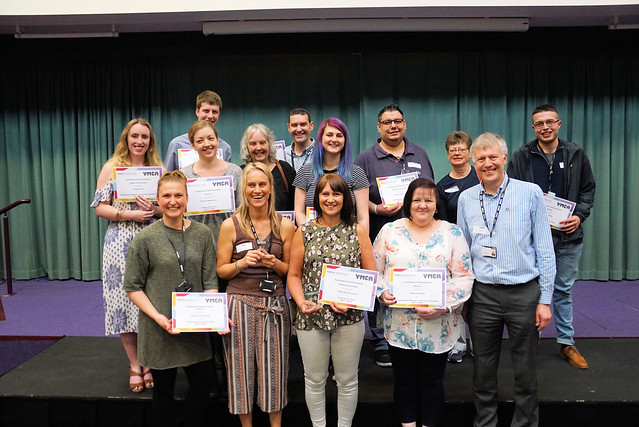